This video shows exactly how to make bulletproof coffee. I’ve been making this stuff for years, and there are definitely some cons to using a traditional blender, so I found an easier way!

My method is quicker, less cleanup, and frankly – without this little shortcut – I don’t think I would bother going through the effort in the morning to make this stuff. At least not as often.

Updated For 2021: Here’s an Even EASIER Option…

I heard about this stuff called Fat Fuel Coffee recently and knew I had to come back and update this page.

It’s a little more expensive than the method I showed in the video above, so I treat it as more of a treat, or when I just really can’t be bothered to go through the usual process.

This product is a POWDER, that has all the good stuff from regular Bulletproof coffee that makes it great, but in a powder form that you can just mix easily on your own, with a spoon…

Check it out, I bet you’ll love it! 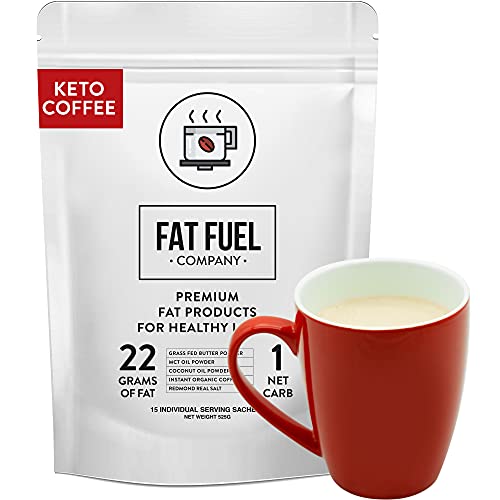 I also want to talk a bit about what “bulletproof” actually means, and provide some information on the de-bunkings of the bulletproof marketing hype, along with some more affordable alternatives to Bulletproof coffee, which is essentially the same ingredients, just made by different brands.

Here Are Some Recommended Products for Making This Stuff at Home:

Here’s How to Make Bulletproof Coffee the Easy Way:

Thoughts On Blending/Mixing Your Coffee And Butter

I’ve tried using a spoon to mix it, but it doesn’t mix as well and you don’t get that really nice foam at the top. I’ve tried using a blender. I purchased a glass blender (Because the hot coffee was damaging my plastic Ninja blender.)

I poured in the coffee, the fats, put the lid on, turned it on… and the pressure from the heat caused the lid to shoot off, and there was fat-drenched-coffee EVERYWHERE in the kitchen.

Then I started using a submersion blender, and it worked great, but it was still a bit of a chore to pull it out of the drawer, put it together, plug it in, rinse it, take it apart, put it away…

So I was thinking “THERE’S GOT TO BE A BETTER WAY!”

And then I came across a little coffee frothing device from Ikea for about $5.

It does a decent job of mixing the oil, butter, and coffee together and it takes a split second to rinse afterwards. (Note: Since originally posted this article, I’ve since upgraded to a better milk frother, after the Ikea one broke.)

If you haven’t heard of Bulletproof Coffee, basically the concept is to add ‘healthy fats’ into your morning coffee.

They say that the fats bind to the caffeine in a special way that sort of acts as a time release, so that the effects of the caffeine are come on more slowly and this stops you from getting those coffee jitters and then crashing.

People have reported that this extends the effectiveness of the caffeine, helps a great deal with intermittent fasting and a keto diet, helps with focus and productivity, and a myriad of other benefits.

If you’re curious, the best thing to do is to try it for yourself and see how you feel.

What’s the Deal With Bulletproof Coffee?

The “bulletproof” name is actually a brand name, owned by Dave Asprey, a controversial health-guru sort of marketer guy.

He’s not the first guy to add butter into coffee, it’s been around forever, but he has done the best job of marketing it and getting attention.

Some of the claims are a bit over the top unfortunatly, and Gizmodo actually released an article debunking a lot of the health claims.

Dave Asprey has claimed that he has been offered large sums of money by huge coffee companies to teach them how to remove mycotoxins and mold from their coffees, and that if you want coffee that’s free from these mycotoxins you’ll need to hand over $19 a bag for “BULLETPROOF COFFEE”.

So if you believe the narrative, this guy was able to develop a way to remove mold and toxins from coffee beans that none of the world’s hugest coffee companies have been able to figure out. In all honestly, it sounds shady as hell.

I’ve read that an adult who drinks 4 cups of regular coffee a day will only have about 2% of the safe level of mycotoxins… In other words, the coffee companies have been aware of this for decades, and you don’t need to spend a fortune on Asprey’s “special” coffee. He’s creating fear out of something that’s a complete non-issue.

None the less, it’s a really tasty drink and I have definitely felt some benefits to drinking it.

It took a lot of trial and error and I’ve finally figured out how to make bulletproof coffee the easiest way, so I wanted to make a quick video showing you how.

Just keep in mind that you don’t need to spend money on any special kinds of coffee or anything else that somebody is trying to sell you.

No, it doesn’t magically melt away fat or turn your body into some incredible fat-burning machine.

It doesn’t instantly turn you into Bradley Cooper from Limitless with the mental stamina and focus of a super-human.

It is, however, a creamy, rich and tasty way to enjoy a cup of coffee without any added sugar, and even thought there’s two tablespoons of grease in it, it’s still got a lot less calories, and is better for you, than most drinks you’d get from Starbucks.

[…] coffee offers more caffeine and a good boost of energy in the morning, green tea is often considered a great drink for health, containing heaps of antioxidants and other […]

This is how I make my own version bpc. Instant coffee Almond milk Mct oil and butter microwave to liquified. All pour and blend together. Foamy amd creamy.

Do you think I'm doing it right? Thx you

I'm not a huge fan of instant coffee personally, and I've usually just let the heat from the coffee itself melt the butter, but I'll tell ya what - if you like it this way, and it makes you feel good, that's what matters and I can't see anything inherently wrong with your method.

One thing to check would be that there isn't a ton of sugar in the almond milk - some brands can be a bit sneaky. Also if you're able to get grass fed butter where you live, that's generally recommended as well. It's harder to find in some areas.

Where is the bulletproof coffee video and where can we get the mentioned Ikea device for about $4.00?

Hey De, thanks for reminding me that I need to add the video back to this article! It was accidentally removed when we had to rebuild the site.

In the meantime, here's the direct link to the video on Youtube: https://www.youtube.com/watch?v=cgnWN0MWbmw

The $4 device is the milk frother, it's available at Ikea for about $4, but I've seen them at Wal-Mart for around $10 as well, for a nicer one.