Milk thistle has long been known as an effective food supplement to help with various areas of health, including liver problems and type 2 diabetes. And, the good news is that you can have it as a tea as well! Join us as we take a closer look at this miracle herb, the health benefits of milk thistle tea, where you can buy it and even how you can make your own.

What is the milk thistle herb?

Also known as Scotch Thistle, Saint Mary’s Thistle, Mediterranean milk thistle and scientifically as Silybum marianum, this herb is sometimes considered to be an invasive weed. It’s cultivated for many uses, including what many believe to be a healthy beverage – Milk Thistle tea.

A plant in the Asteraceae family, which is also home to ragweed and daisies, the milk thistle herb is native to Mediterranean countries through to Asia and has red to purple flowers. The seeds are used for the extract, which contains silymarin and fatty acids such as linoleic acid.

The health benefits of milk thistle

Although several clinical studies contradict each other, it is believed that milk thistle tea benefits the treatment of liver diseases and some say it even slows the progression of cancer. Also considered to contain estrogenic actions, milk thistle tea has been said to stimulate prolactin and can even be used to treat swelling thanks to its anti-inflammatory properties.

Here are the health benefits in a little more detail. Please bear in mind that milk thistle tea is not intended to solve any serious health problems and should only be used to support instead of curing. If you have any significant conditions, always seek medical advice

Studies have also shown that milk thistle could strengthen the immune response and play a part in fighting off infections. In animal studies, milk thistle tea has been shown to improve the overall immune response in mice. While human studies are needed, the theory is there.

A 2015 study concluded that milk thistle helped to increase resistance to oxidative stress, which has been linked to Alzheimer’s disease.

In this way, milk thistle may help improve cognition and treat degenerative conditions that affect the mind. More research on humans is needed to confirm the effects of milk thistle on cognition.

Studies on mice have found that thistle extract may have helped to reduce insulin resistance, which is a typical issue for people with diabetes. However, further studies are needed to confirm the same results in humans drinking milk thistle tea. As well as helping with your blood sugar, milk thistle may even help with a little bit of weight loss.

People who should avoid this tea due to milk thistle side effects include pregnant and breastfeeding women, those who have a ragweed allergy and women dealing with fibroid tumours, endometriosis and uterine/ovarian/breast cancers.

Even though milk thistle is used as a supplement for protecting the liver and associated conditions, it can contain high levels of mycotoxins that can be harmful to the liver.

Always check with your doctor before taking any herbal treatments to ensure safety, especially when you’re taking other medications.

Some of the best milk thistle tea brands

Like many herbal teas out there, there are plenty of options when choosing your milk thistle tea. Here are some of our favorites: 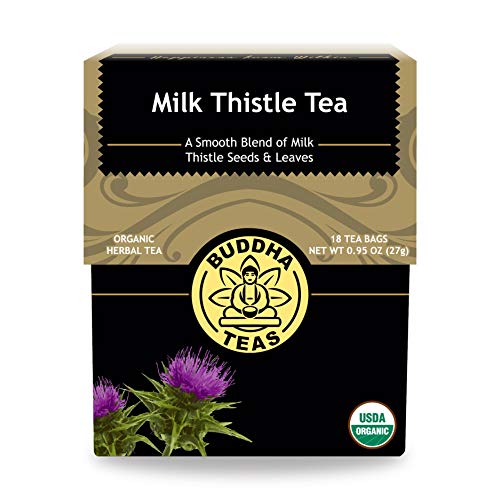 Buddha tea is a famous tea brand that specializes in herbal teas from high-quality sources. This is a fantastic option for anyone who wants to try milk thistle tea. This product is organic and has absolutely nothing added or taken away from the natural goodness. The flavor is mild and is perfect for when you want to relax with a hot drink that’s healthy too! 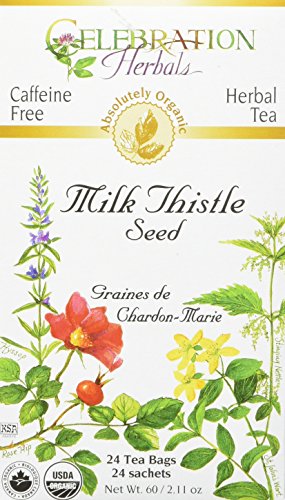 This tea from Celebration Herbals is another popular choice for fans and beginner-drinkers of milk thistle tea. Completely organic, honest and natural, many people drink it to help support their health in an affordable and mild-tasting way. 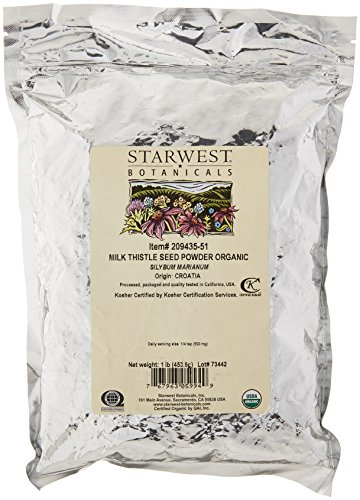 While this is not a tea as such, you can use milk thistle powder in a very similar way. Just add to hot or warm water, or another herbal tea mixture to help with supporting liver health and general wellbeing. This bag of milk thistle powder is an entire pound, meaning that it will last you some time.

How to make milk thistle tea

If you want to prepare a cup without using milk thistle tea bags, you can either use the powdered seeds or an extract, for which only 20 drops are needed to be added to hot water. Some find the flavor a little unpleasant, so you might want to add honey, lemon or a sweetener of your choice.

For beginners who want to know how much milk thistle to use for tea, it will depend on whether or not you plan to steep it with other herbs and how strong you like it, according to your palate and needs.

An average limit of 4 cups daily should suffice and the following methods are a great place to start, to give you an idea of how much you can take.

How to make milk thistle tea from powdered or crushed seeds:

Place a tea bag in your cup and pour near-boiling water over it until your cup is nearly full, to allow room for added sweeteners, etc. Allow the tea to steep for at least 5 minutes and strain before adding honey or milk, according to taste.

A nice twist on the above methods for milk thistle coffee:

Blend 1 tablespoon each of powdered Milk thistle seeds, roasted dandelion root and chicory root. Place in a teapot or French press and pour 2 cups of near-boiling water over the herbs.

Stir and allow the tea to steep for 10 – 15 minutes, then strain and serve with sweeteners and/or milk if desired.

Remember that there are always risks when trying anything new, especially when it’s a herbal supplement. Milk Thistle tea has a variety of healthy properties but if you have allergies, you are probably best advised to try another herb.

According to those who swear by the medicinal qualities of this tea, the benefits are well worth it.

Get yourself some milk thistle tea

Now that you know a little more about milk thistle tea and how it can help you maintain your health and wellbeing, it’s time to get out there and try it out! There are many brands and herbal teas that either use it in its entirety or use milk thistle extract with other wonder-herbs. While milk thistle tea may help you with certain medical conditions, please don’t count on it as the sole medical approach to take.