Malcolm Ferris-Lay, from the marketing firm Elmwood Designs, founded Make Mine a Builders tea company in 2007, located in Leeds, U.K.

They attended an annual conference for builders and contractors – called Interbuild, where they held a tea tasting with the goal to create the great British cuppa.

The Story of Make Mine a Builders

With a focus on developing the quintessential builder’s brew for the building trade, this tea company set out to re-invigorate the classic black tea industry by producing a no-nonsense, full-flavored blend.

After overhearing an order during a morning tea break, where someone advised “Make mine a builder’s”, they got to thinking about the strong, robust brew that builders preferred.

Realizing that the fashionable fruity blends were pretty – without quenching a real thirst for a proper cup of tea – they set out to fill the void.

Considered an authentic British cup for hardcore tea drinkers, they soon began selling their tea in the U.K., USA and Australia.

What is Builder’s Tea?

Also referred to as builder’s brew, this tea is an English slang term for a strong cup of tea.

Usually drunk by laborers during a well-earned break, builder’s tea is usually brewed in a mug with a tea bag, rather than a pot of loose leaf tea. Typically rich and robust, it’s brewed for a little longer than your average cup of tea.

Builder’s tea is high in tannin and caffeine, making it a good alternative for coffee, without the jitters. Assam leaves are considered better suited for this type of tea, which is consumed throughout the building trades in both England and Ireland, for its soothing and refreshing qualities.

Mostly drunk with milk and sugar, builder’s tea is a friendly snub to the more flowery and fruity infusions that have become so popular with the general public.

Why Builder’s Tea is Making a Comeback

Builders and laborers alike have always known that a good, strong cup of tea is the best way to quench a thirst. In South America, yerba mate benefits this purpose.

Made famous by mentions in movies such as ‘The Best Exotic Marigold Hotel’ and given a nod by actress Rachel Weisz – who prefers a strong builder’s brew – this style of tea is popular for those who like it pure and simple.

How Make Mine a Builders brought Tea Back to The Basics

Advising that “others sip – we slurp”, this tea company is proud to offer hardworking tea drinkers a straight-forward cuppa, after turning to the experts: the builders. Asking 300 of them to rate their blend, they were given top marks for refreshing flavor and strength.

To ensure that their brew continues to “hit the nail on the head”, they have partnered with the Federation of Master Builders, which is Britain’s largest building trade association.

Make Mine a Builder’s teas are ethically sourced and proceeds from their sales go towards a foundation set up by the Federation of Master Builders, supporting a range of building trade initiatives that includes apprenticeships, training, recruiting and building projects around the world.

Make Mine a Builders Tea

This tea company sources hand-picked leaves from the finest tea estates in Malawi, Kenya, Tanzania and Uganda, which are then blended for good, strong color and flavor.

Believing that good tea is like a good building: strong, sturdy and well put together, they have produced a cuppa for builders and anyone who enjoys a quality brew without the fuss.

Make Mine a Builders Teabags 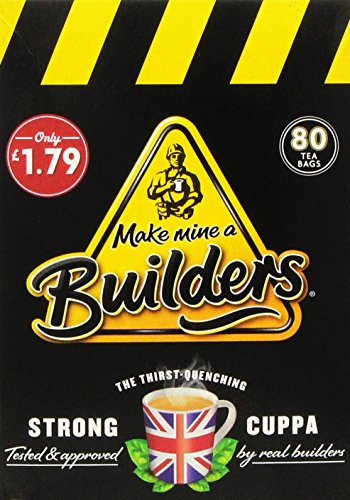 Using flat, round teabags without strings, staples or labels, this tea is smooth and refreshing with a bold flavor. Aromatic and bold without bitterness, this brew is malty, satisfying and made from 100% black tea. Try it black, with milk and sugar or iced for a strong, thirst-quenching beverage.

Make Mine a Builders have a ‘Brewsletter’ that you can subscribe to and their infectious, charming approach owes itself to headlines such as “this country wasn’t built on chamomile”.

Using the colors of hard-hats and danger tape for their packaging designs, along with the British flag, this patriotic tea company have brought the industry back to the basics.

More: Take a look at some unique tea sets here!