You might not know it, but you can go ahead and put jam in your tea! Well some people do anyway…

While we’re going to be talking a little more about this, we’re also going to explore a little history at the same time.

So, if you’ve ever heard about Russian jam in tea, here’s the whole story behind it all.

Can You Put Jam In Tea?

Using a fruit jam or preserve to your tea is of course a way of adding some sweetness to counteract the bitterness that some tea has.

In fact, there is a whole culture built around improving the taste of tea by using jam.

Fans say that the fruit enhances the flavor of the tea and is not as overwhelmingly sweet as other potential sweeteners. I can agree with this, I did whack a lump of straberry jame in my cuppa and it wasn’t too bad… Although the chunks of strawberries thorugh me off a little….

For the majority of tea drinkers, white sugar is the product of choice to add to their steaming cup or mug.

Of these, granulated sugar is the most popular to add, but the more old fashioned sugar lumps or cubes are still available.

One lump is roughly equivalent to a teaspoon of the grains.

There are a range of other options too for your beverage such as honey or syrup, for instance.

In some countries such as Japan and Thailand, that sweet zing is provided by condensed milk or evaporated milk and sugar.

The more health-conscious among us opt for stevia or xylitol now that other more chemical-based sugar substitutes have started to fall out of favor.

But—and this may come as a surprise—thick fruit jam as a tea sweetener is not a recent development; it has been around for centuries.

It is just a new discovery for tea-lovers outside Eastern Europe, including those in the US.

It’s worth noting that thinner jams are usually preferential, along with those that don’t have any seeds in them.

However, some people will use just regular jam or jelly off the store shelves. Some folks will add jam from their garden, processed specially for tea.

Even the thinner jams are still going to have a thicker consistency than syrup but will dissolve and mix into the tea perfectly in just a moment or two.

Russian Origins of Jam in Tea

So where and when did this practice begin? Most people associate tea with England and Asia.

Formal tea ceremonies are an important part of Japanese and Chinese life and the UK has a long-established tradition of high tea and a “cuppa” pretty much any time of the day or night.

Tea isn’t a drink one necessarily associates with Russians, but it should be.

Russians have been brewing and drinking black tea for centuries with their “tea culture” dating back to the early 1600’s when the first gifts of tea were made to the Tsar and members of the nobility by the Chinese.

Tea is in fact the national (non alcoholic) drink and at time of writing Russia is the fifth largest consumer of tea globally.

Russian tea is consumed black and there are several practices when it comes to sweetening the very strong brew Russians favor.

Firstly, a piece of the very large sugar cubes found in Russian tea is held between the front teeth, which is then drunk through it.

Alternatively, pieces are dipped into the hot liquid and eaten. Finally—and very significantly—fruit jam or preserve is used in lieu of sugar.

As an aside, Russian jam is also used in a very similar way for sweetening tea in restaurants and homes in Azerbaijan.

As with the sugar, one can hold some jam in the mouth and sip the tea through it or the jam is added to the hot water.

Typically raspberry, cherry , and strawberry jam or preserves are used with cherry being the most traditional.

The jam is served in a bowl along with the other tea-making equipment for the complete beverage.

In Europe and elsewhere in the West, very early kettles were made from ceramics and later from tin and iron.

The Mesopotamians were way ahead as they had bronze kettles with spouts as early as 3500 to 2000BC.

Metals were of course favored as the water heated faster over an open fire when it was in metal than in other materials.

Silver and pewter were used and copper was the metal of choice in the 19th century. In China kettles were made of porcelain.

The Russians adopted the samovar from the Mongols with whom they traded for tea before routes opened to China.

The Russian samovar was placed over coals and tea was both made and kept hot in these containers.

The samovar, like the modern urn it probably inspired, has a faucet or tap from which the liquid is poured.

This method of making and storing tea also explains why and how Russian tea is so very strong and therefore in need of unique types of sweetening!

Many of the old Samovars were extraordinarily ornate and very beautiful and today they have a great deal of aesthetic, monetary, and historic value.

Along with these lovely objects the Russians also developed glasses for tea that were placed in metal holders with handles called podstakannik.

The wealthy used holders plated with nickel, silver, or gold.

Some holders are plain and others very ornate and incorporate delicate filigree work or engravings.

A Russian tea set included the Samovar, a delicate porcelain tea pot covered by a cloth, glasses in their podstakannik, a bowl of large sugar lumps and the all-important bowl of jam.

Sometimes a guest is given his or her own bowl of fruit preserve or jam.

Modern samovars are electric and have a place on top where the tea pot full of ready-made tea sits to stay warm.

The glasses and holders are also being replaced in some homes by china cups.

In the West, tea drinkers have only used kettles.

Initially, they were placed on top of coals or suspended over fires. Later stove-top kettles were used to prepare the beverage.

The first electric kettle arrived on the scene in the US and the UK in the 1890’s.

The modern single-element variety launched as late as 1956 and it was this decade that also saw kettles manufactured from stainless steel.

In recent years metal kettles have been replaced by plastic and glass ones in terms of popularity.

Cordless electric kettles have the advantage that they switch off when the water boils.

If you want to make your Russian tea experience more authentic, you can buy your own Samovar.

Here are a couple of options! 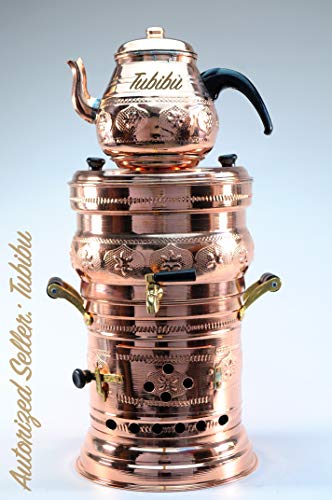 A really beautiful and traditional copper Samovar. Guaranteed to turn the heads of your guests and brew up a fantastic cup of traditional tea. 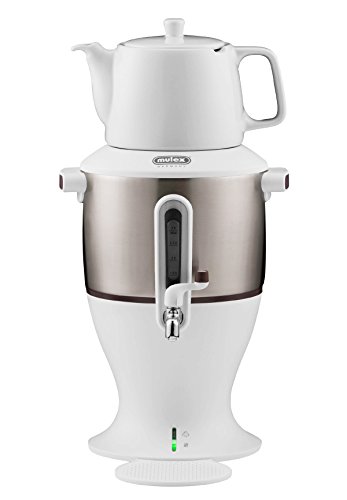 A more modern interpretation of the traditional samovar.

If having a shiny copper power doesn’t fit in with your kitchen aesthetic, then this will do the same job with a little less visual loudness.

Time to Add Jam to Your Next Cup of Tea

We can decide whether we want loose leaves or bags, a stove-top kettle or an electric one, and a cup or a mug.

There is also a dizzying range of teas—from traditional to eastern to herbal—to choose from and now we are also spoilt for choice when it comes to creamers (full cream, skimmed, semi-skimmed, soy, almond, coconut, condensed, and evaporated milks).

And, yes, there are a host of sweeteners too.

The next time you make a pot or cup of your brew of choice how about adding jam to your tea before drinking?

Go on; give it a try and when you do, think of the Russians and their contribution to tea-drinking world-wide!