Is The Aladdin Tea Infuser Mug Actually Worth The Price?

There were some older models of the Aladdin Tea Infuser Mug that were just downright not great, to put it kindly.

A Bit of Backstory…

We’ve actually featured a newer version of this product as a decent budget option for somebody who needs a loose leaf tea infuser bottle, but we wanted to dig a bit deeper and update everyone since we’ve found an even better option (by our estimation), which we’ll feature at the bottom of this page.

Plenty of reviews pointed out that they were leaky, that you’d get a mouth full of tea leaves if you didn’t empty out the leaves first, and that it essentially didn’t make any sense as a to-go unit. It didn’t work right, people were upset, and Aladdin went back to the drawing board to come out with a newer version, which has made some drastic improvements and is much better reviewed.

The latest version has a little cage that floats inside, sort of like you’d be inside if you were looking for sharks in the ocean. It’s one of the pricier tea infuser bottles out there, and it’s not one of the best anymore, even after the improvements, so we have a tough time recommending it, even though it made our list in the past.

It has 4.2 out of 5 stars on Amazon, which is nothing to be ashamed of in the grand scheme of things, but there are some other options that have better reviews and are less expensive, and simply work better in our opinion.

Most people would rather pay less money for a better product that has much better reviews, so if you’re interested in the Aladdin tea infuser, by all means, check it out and you might love it – but you’d be wise to take a peek at some other options first.

It’s good to see that Aladdin has made improvements based on feedback, but it’s worrying that they didn’t notice these things the first time around, either, before releasing the initial product.

Our first alternative to the Aladdin tea infuser mug is made by a company called Topoko, it costs about half as much as the Aladdin does, and it’s made out of glass instead of plastic. Beyond that, it’s quite a bit bigger so you can hold a lot more tea! Here’s some more information… 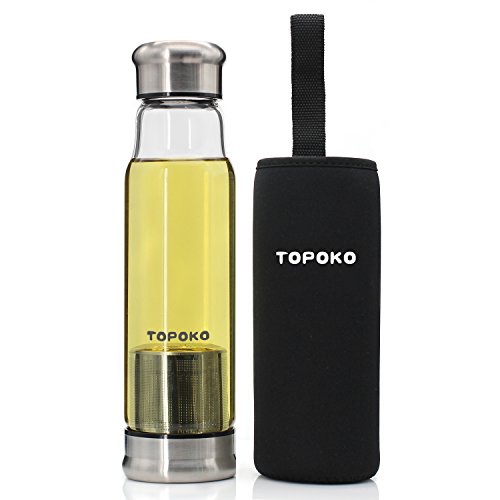 There’s a lot to like about this option. It’s super easy to clean since you can access it from both ends.

It’s made from glass, instead of plastic, which many people appreciate. Granted, it does mean you have to be a little more careful not to drop it, but the benefits outweigh that one con. It won’t retain old bitter tea flavors, you don’t have to worry about little scratches holding onto bacteria, and you can always clean glass much more thoroughly than plastic. If you’re concerned with drinking a hot beverage out of something made from plastic, that’s not an issue when your infuser is made from glass!

All in all, it costs less than the Aladdin infuser, and it’s made from glass, and it holds more, and it comes with a nice little carrying pouch that’s padded for extra protection. Don’t get the wrong idea – this bottle made by Topoko isn’t fragile by any means, you don’t have to wear satin gloves to handle it.