Located in Garfield, NJ., Adiago Teas was started in 1999 when Michael and Ilya Cramer decided to join their mother’s endeavor to bring quality, gourmet tea to their community. Sophie was known in the 1990’s to those close to her for her love of serving tea, bought from Chinese markets locally.

As a part-time manicurist, she had no idea that the spark of inspiration to open a tearoom would lead to the robust business she and her sons now operate.

Where it all began for Adagio

After discussing the logistics with her sons, who collectively had a lot of experience with the corporate world and the internet, they decided to focus on online sales of gourmet tea.

After finding a tea supplier and building their website, which included countless hours of research into marketing and financial considerations, Sophie and Michael focused on filling orders from a small basement while Ilya continued working his corporate day job.

As time rolled on, their humble beginnings soon evolved into a monster too big for the basement, with tens of thousands of dollar’s worth of product filling their garage at any given time and delivery trucks coming and going almost non-stop.

After 18 months, they took the big step and moved into their first warehouse. In 2002, Adiago Teas decided that yet another, bigger warehouse was needed in order to continue filling their orders. It was at that time that Ilya left his job to officially join the family business.

Michael had a passion for teaching consumers that tea could be found outside of the supermarket, even though there was a growing interest in artisan tea.

Adagio understands that many fledgling tea worshipers can be frightened off by companies who treat their product like complicated gourmet triumphs and come off like they had to get a PhD in order to sell their tea.

At the same time, Adiago Teas enjoys sharing their knowledge in a friendly fashion, as their website confirms. In the future, this tea company plans to sell its own line of glassware, as well as teapots, cups and other wares.

At first, this tea company offered 20 varieties of tea, but as the years went by, they included innovative tea wares and special lines such as realiTEA and AnTEAdote, which are also sold in stores. 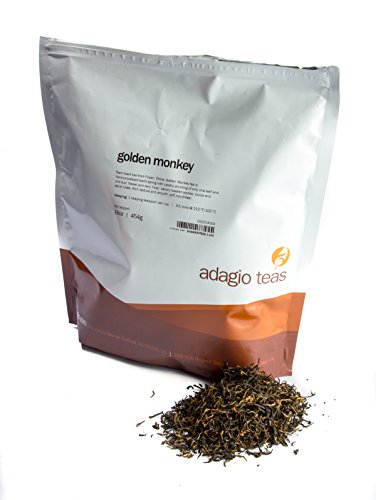 Hand-processed each Spring, this Black tea is from the Fujian province of China. Named Golden Monkey for its unique appearance, with leaves that look like monkey paws, this tea is selected by gently choosing only one leaf and one bud at a time.

With the aroma of roasted apples, cocoa and spice, this rich, sweet tea is smooth and delicate.

An overnight success, Foxtrot is an herbal cocktail of Egyptian chamomile, fresh peppermint and South African rooibos with a hint of vanilla. Soothing and caffeine free, this tea is delicately sweet and clean.

As the name suggests, Adiago Teas suggest that you’ll have a spring in your step after enjoying this flavorful brew. 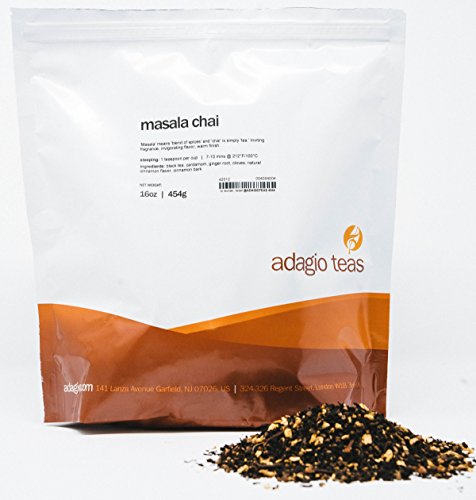 Masala means ‘a blend of spices’ in Indian culture and chai means ‘tea’ – so this is obviously a spiced tea. Combining premium Ceylon black tea with cardamom, cinnamon and ginger, this aromatic and invigorating tea is imported from Sri Lanka.

Zesty without being too spicy, you’ll find this product warming and deeply satisfying to the last drop.

Adiago Teas has so much to offer, even more than the wide array of special blends and authentic teas sourced from countries all over the world. Their sugar free iced teas are also delicious!

This tea company is also involved in the roots campaign to help farmers directly. With a tea of the month club, recipes, products for sale like honeys and spices, Adagio Teas has something for every tea lover and you can even submit your own tea recipes on their website.